So how do I find the time to write? To keep up with the blog? To read the blogs of friends? To read books? To exercise? To NOT overload your brain.

For me, it's do the thing that MUST be done. The commitments to colleagues and my family. Commitments to myself take a back seat.

I'm over on YA Stands (http://yastands.blogspot.com/2012/10/the-dreaded-synopsis.html) today talking about the Dreaded Synopsis.

Thanks!
Posted by Kristine Asselin at 8:34 AM No comments:

I've finally scheduled the next Meet Up for anyone interested in children's literature in North Central Massachusetts.

Who: Anyone interested in Children's Books--authors, illustrators, librarians, booksellers, agents, editors, readers...you get the idea. There's no formal program, just a chance to chat in person.

If you're interested and/or have any ideas for future locations, please let me know!

Walk-ins are welcome, but if you know you're coming, ping me! I like to give the restaurant a heads up on our count, if I can. 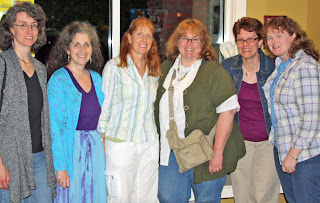 Posted by Kristine Asselin at 9:51 AM 2 comments:

What's So Important about POV?

I'm over at YA Stands today talking about Point of View.

http://yastands.blogspot.com/2012/10/whats-so-important-about-pov.html
Posted by Kristine Asselin at 6:47 AM No comments:

Email ThisBlogThis!Share to TwitterShare to FacebookShare to Pinterest
Labels: How I write, Kristine Asselin, point of view, POV

More Kissing in the Rain

My post popular post on this blog is called Kissing in the Rain, from Valentine's Day, 2012. It gets about 50 hits a week, presumably from Google searches. The excerpt is from my YA novel THE SWEET SPOT, which is under revision with my agent.

Soooo, I thought you might like the following excerpt, from "Stella's Hero," a short story in TIMELESS: AN ANTHOLOGY OF YOUNG ADULT ROMANCE (from Pugalicious Press) written by me and my writing partner, Ansha Kotyk. It's also a kissing-in-the-rain scene. Enjoy!

She would never see Jie again. She would never see his smile or touch his beautiful face. Knowing these things made her steps even heavier. For a brief moment, she thought about walking to the waterfront. It would be easy in this weather to just keep walking. Into the harbor. No one would miss her. All the pain would be gone. Her dress, heavy and wet, would help her sink into oblivion. She began to cry tears of frustration, anger and remorse. Someone grabbed her arm from behind.

Fear gripped her heart. She wrenched free and ran as fast as she could in her sopping skirts.

She stopped but couldn't turn around. A million emotions coursed through her. Relief. Joy. Anger.

His warm hand rested on her shoulder as he turned her to face him.“Stella.” He was out of breath, but he looked determined. “I couldn’t live without...”

She searched his eyes. He leaned toward her and kissed her softly on the lips. An explosion of emotion seared her brain as she pressed her body against his.

He pulled away. “You understand what this would mean?” His eyes met hers, asking her.

“Sometimes you have to give up comfortable living for your dreams,” she said, putting her arms around his neck and pulling him close. She kissed him again, his arms closing around her waist. Nothing in this world was going to take him away from her again. She wouldn’t let anyone tell her this wasn’t right.

And when the kiss ended and the rain fell between them, Jie held her hand tightly. “My whole neighborhood will know about this in an hour’s time. There is no going back. Are you sure this is what you want, Stella Thompson?”

She nodded. “Always. This is what I’ve always wanted. I just didn’t know it until now.”

You can read the whole piece and six other short stories in TIMELESS: AN ANTHOLOGY OF YOUNG ADULT ROMANCE.  Available through Amazon and Barnes & Noble.

Posted by Kristine Asselin at 10:07 AM 3 comments: