My friend Liz wrote a post about her resolutions this week.  As a fellow writer and mom, Liz pretty much nails the resolutions (with the exception of the triathlon--Liz, it's all yours. LOL).  But I'm inspired to reflect on 2010 and think about the new year.

2010 has been a good year for my writing career.  My first work-for-hire book was published last spring.  I was assigned four new titles.  I started querying my first Young Adult novel to literary agents--and got some good feedback.  I can only hope that 2011 will build on that success.

1. First and foremost, I need to be better at trying to write every day.  I have a tendency to finish a project, and then "rest."  I've pretty much taken the last six weeks "off" from writing after I finished my last work-for-hire project.  #wastingtime.  I need to ramp up again and write, even if it's bad writing.

2. I still have three partials and one full manuscript out from querying last summer and fall.  I need to think about revisions on the novel and decide if I should keep querying or make significant changes.  Jury is still out.

3. I'd like to get some more work-for-hire contracts and continue to write non fiction.

Merry Christmas to all my family and friends who celebrate.  To those who celebrate other holidays--enjoy the food, the fun, the festivities.

And Happy New Year to all.

2011 promises to be a wonderful year. 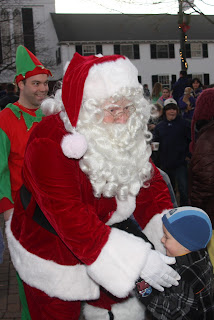 Posted by Kristine Asselin at 10:00 AM No comments:

I've been working with Capstone Press for two years.  I'm in the final stages of my sixth project.  Last Winter, I had the joy of holding my very first published book in my hands (January 2010, TAURUS, VIRGO, & CAPRICORN: ALL ABOUT THE EARTH SIGNS).  Since then, I've worked on four more nonfiction titles.  It's been quite a ride, but it doesn't seem quite real until you hold the hard copy!  Thank you Capstone Press!  (For anyone thinking of getting into work-for-hire, I've had a great experience.)

In January 2011 (that's, like, two weeks away!), three of my titles will be released.  They've been viewable on Amazon for a couple of months.  But this week, the new titles were posted on the publisher's website. 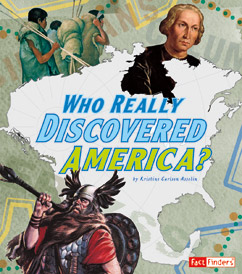 The very first assignment I received from Capstone (WHO REALLY DISCOVERED AMERICA?) is one of the three coming out in January.  I'm particularly excited about this one.  I think kids are really going to like it.  Cool cover, right?

The other two are: OUR SUN and STARS.  Suffice it to say, anything related to the sky is popular with my daughter and her class.  I'm going to be a hero in the 2nd grade this spring.  I can't wait to show them!

Yes, I'm still working on my fiction (albeit at a snail's pace right now), but I wanted to share the excitement.  Nonfiction is a blast to write, and seeing the progress and the end result is priceless to my writer's ego.

Happy Holidays to all! 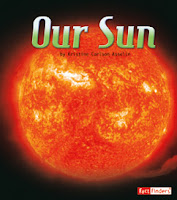 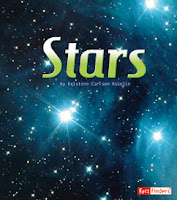 Posted by Kristine Asselin at 7:20 AM 9 comments:

Email ThisBlogThis!Share to TwitterShare to FacebookShare to Pinterest
Labels: Columbus, my books, Our sun; Stars, Who Discovered America

THE TIME TRAVELERS by Linda Buckley-Archer

This is my favorite middle grade time travel book.  I absolutely love it.  Originally called GIDEON THE CUTPURSE, the cover grabbed my attention in my local library about two years ago.  It was a die-cut outline of a stone wall, with a man's eye peering through--slightly creepy but wicked cool. 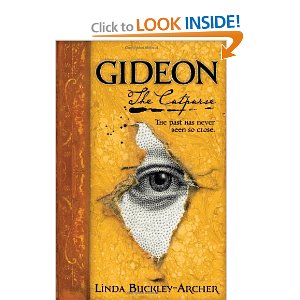 This is the description from the official webpage...

"A chance encounter with an anti-gravity machine catapults Peter Schock and Kate Dyer back to the 18th century and sets in motion a calamitous chain of events."

"Starred Review. Grade 5-8–Peter and Kate, 12, have literally stumbled from the 21st century back to 1763, and even though they are still in England, many things have changed. Their time travel must be connected to the antigravity machine Kate's father has been working on, but since it has been stolen by a vicious criminal called The Tar Man, they really have no choice but to trust Gideon, the stranger whose offer of help seems genuine enough, even if he is known as a cutpurse. Buckley-Archer may very well give J. K. Rowling a run for her money. This wonderfully rich and complex novel, written in lyrical and vivid language, is destined to be a classic. History interweaves with science, social issues in both centuries are thrown in; yet what readers will remember most is a fast-paced plot with a cliff-hanger ending and multidimensional characters who continue to inhabit their thoughts long after the book is closed. With appeal for reluctant and advanced readers, this novel is a rare gem."

I love the characters of Peter and Kate.  They're 12--and strangers when the book begins.  They wake up in 1763 after accidentally triggering a science experiment.  They have to rely on each other and end up being really good friends.   Gideon is a cutpurse (pick-pocket) who ends up being one of their only friends.  He witnesses their arrival, so he believes their story.  Linda does a great job of portraying two modern English kids in eighteenth century London.  For a real treat, get this book on audio and listen to Gerard Doyle's great interpretation.

The book is now known as THE TIME TRAVELERS and the cover looks like this: 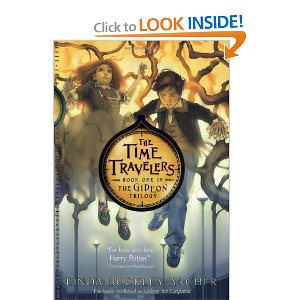 The sequels THE TIME THIEF and TIME QUAKE aren't quite as good as the first one, but they round out the story of Kate and Peter, and of course Gideon.

If you like time travel and/or history, you'll love this book.  It's well worth the ride.
Posted by Kristine Asselin at 6:00 AM 5 comments:

America is my all time favorite band.  No one sings this song like Dewey Bunnell and Gerry Beckley.  But James Blunt comes close...enjoy.
Posted by Kristine Asselin at 9:37 PM No comments:

I'm so excited for Beth Revis' book (Across the Universe).  I've been reading her blog for a year and it's finally almost time!

She's giving away mucho prizes in honor of her book release--check out her blog! (But I'm going to win the watch...)

Go check it out!
Posted by Kristine Asselin at 7:49 PM No comments:

The Last Unicorn by Peter Beagle

I thought it would be fun to profile some of my favorite books on the blog.  I'm in a bit of a "break" from writing (holiday, head-cold, procrastination...ya know.), but I want to keep the blog going...

Today, I'm profiling one of my all-time favorite books: THE LAST UNICORN by Peter Beagle.

I normally read books before I see movies, but as fate would have it, in the mid-80's I discovered a wonderfully animated motion picture.  The movie's soundtrack was composed by Jimmy Webb and sung by my absolute favorite band of all time, America (can't be embedded, but click here to hear the title song.)  I loved it.  And when I found out it was based on a book of the same name, I immediately picked it up.  I think I might have been 14 or 15.

The movie's script was written by Peter Beagle, himself.  So the dialogue was very true to the book.  The book is simply a longer, more detailed version of the story.  The language is lovely and haunting.  The sarcasm is sometimes subtle, but not always.  I'm reading it out loud to my daughter at night now, and I'm falling in love with it all over again.  The funny thing is, I can hear the character's voices as I'm reading it (Mia Farrow and Jeff Bridges and Alan Arkin).

It has some of my favorite quotes ("it's you or me moth, hand to hand to hand..." and see my sidebar to the left.)

It's not a magical unicorn-y rainbow world.  Parts of the world are harsh and dark.  The last Unicorn discovers that she IS the last.  And she leaves the safety of her forest to search for the other unicorns.  Along the way she meets bumbling magician Schmendrick (who is immortal in his own way); Molly, a bitter middle-aged matron; and Lir, a handsome hero.  She also meets King Haggard and the Red Bull, who have conspired to trap all the unicorns of the world to keep for themselves.

Schmendrick manages to summon all the magic in his possession to transform the Unicorn into a young woman, thereby saving her from the Bull.  But he can't just change her back at will.  They have to enter King Haggard's castle and find their way out past the Bull.  Lir, the King's son, is desperate to help the Lady Amalthea, the mysterious and beautiful woman living in his home.  Little does he know that she is not really a human woman.

Don't expect a magical happy ending where the princess marries the prince in the end.  "There are no happy endings, because nothing ends..."  It's sad and hopeful and beautiful and haunting.

Peter Beagle first published THE LAST UNICORN in 1968.  In 2007, he published a short story sequel entitled TWO HEARTS.  Just so you know, it made me cry.

Let me know if you like it!  And watch the movie, too, if you have a chance.  Oh, and listen to the sountrack...
Posted by Kristine Asselin at 6:00 AM 8 comments:

Sugar and Ice by Kate Messner

It's so cool when a great new book come out from an incredible author.  For me, it's even cooler to have made a connection with an author who I admire as much as Kate Messner.  I had the chance to review an ARC (Advanced Review Copy) of SUGAR AND ICE, which comes out next week, back in June.  My review of Sugar and Ice.

For Claire Boucher, life is all about skating on the frozen cow pond and in the annual Maple Show right before the big pancake breakfast on her family's maple farm. But all that changes when Claire is offered a
once-in-a-lifetime opportunity-a scholarship to train with the elite skaters in Lake Placid. Tossed into a world of mean girls on ice, where competition is everything, Claire soon realizes that her sweet dream-come-true has sharper edges than she could have imagined. Can she find the strength to stand up to the people who want her to fail and the courage to decide which dream she wants to follow?
"Even those who won't know their double toe loops from their single salchows will enjoy reading about what it takes to make it on the ice."      ~Booklist

Congratulations to Kate on the new book!
Posted by Kristine Asselin at 11:22 AM 3 comments:

Kristine Asselin
Writer of contemporary YA and MG fantasy. My debut MG comes out with Simon & Schuster/Aladdin in February 2018. Represented by Kathleen Rushall of Andrea Brown Literary Agency.